skip to main | skip to sidebar

Someone e-mailed me with a BRILLIANT suggestion.

Women who have passed menopause  or are pregnant, and no longer need to buy sanitary products, can set up a little money box and put the money they would spend each month on those products into the box.  They can then use that to donate to charities who provide pads to the needy!
Posted by Obsi at 6:43 PM No comments:

Sister Hope no longer accepting pads, and a new charity I found

Sister Hope have decided to move in a slightly different direction, and instead of taking cloth pad donations, they will now be selling bags and using some of the profits from that to buy pads from Afri-Pads.

"Sis Hope has partnered up with Afri-Pads, a female run initiative in Uganda, to distribute menstrual kits to school girls in need. How will we do that, you ask? Well that is where our one to one model comes in: for every bag you purchase from Sis Hope, we will give away one menstrual kit to a girl in need."

Which is a shame for people who like to sew pads and need places to send them, but understandable given the high cost of postage. They do suggest sending pads to http://www.projectthrive.org

And don't forget, there are other organisations who are still accepting cloth pads - look at the http://www.donatepads.org website for details

Also.... I found http://sheinnovates.com - I urge you to go look at their YouTube video - it's beautiful! http://www.youtube.com/watch?v=EKmt7PwYPCY

Unfortunately they don't take pad donations, but they are asking for $28 donations, which are used for setting women up in pad making businesses - which not only helps the women who makes the pads, by giving her a business to support herself and her family, but it then gets more pads out there so that more women can have pads to use - win win!
Posted by Obsi at 9:06 PM 4 comments:

I bundled up all the pads and wetbags for Sister Hope. 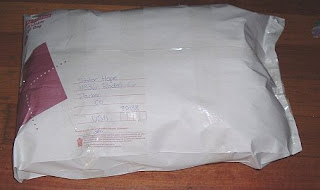 Yes.. they all fit in there!  (though trust me, that bag is HUGE)  They only *just* fit too... I don't think I could have even squeezed one more in!  I put the pads into ziplock bags and basically vacuum sealed them to remove as much air as possible so they packed down flatter (like a "space bag").  Otherwise I'd not have got them in.
I also sent off a batch of breast pads to Shanti Uganda
(it looks pathetically small, but breast pads squash down nice and flat and there were only 8 pairs - still... every one helps!) 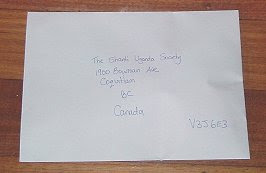 and just in case you wanted proof... the receipt.
Excuse the messy handwriting :) 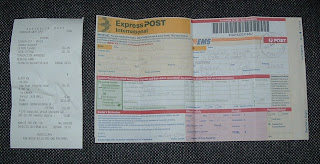 The pad package came to just under 6.5kg - so postage ended up being $121.75 (plus the cost of the bag)... I'd estimated it would weigh over 6.5 kilos and that would have been $130.  So we have the choice of either donating the extra to one of the organisations or (what I think is best) saving it to go towards the next lot we post out... since we'll need to do fundraising to get money for that later....  I'll tally up how much we're over shortly (we're still waiting on one of the auction payments) and make a note of that. If anyone has any thoughts on that, feel free to comment.
And I just wanted to say a HUGE thank you to Snaps Australia - I'd asked if they happened to have any scraps lying around, and they sent this large box full of very much needed hemp fleece (for the core of pads), and 2 enormous bags of snaps (and one lot is purple too!  {I love purple}) 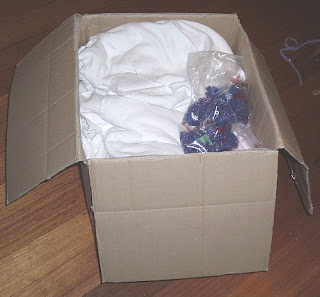 And more pads are needed!!!
I was contacted by an Australian agency (in my state too, handy!)... who said this:

"We are a small AIDS-care charity….and we are working specially in Africa.
We have built several schools in Malawi….and at two of them we have built onsite hostels…to each accommodate 50 teenage girls on site to spare them lengthy and dangerous travel. You may care to visit our website at www.aids.net.au
We are now thinking about their sanitary hygiene needs and wondered whether you assist organizations like out if we choose to buy cloth pads in bulk for them."

So I'll have to get back to them and see what we can do.
And oddly enough, my daughter's school is doing work on different cultures/languages each term, and they are looking at Tanzania this term (it was Italy last term).  Apparently they are going to be working on fundraising to help build a school in a remote area.  So I sent a quick letter to her teacher explaining that I'm working with organisations to get pads out to girls in schools who need them, and if they find they have a need there, let me know.  The teacher spoke to me the other day (pretty excited about it) and is going to bring it up at their next meeting where they are discussing the school stuff... so I'll find out soon if they like the idea or not.
Posted by Obsi at 12:05 AM 4 comments:

Pads will be shipping out shortly!

Thank you to the lovely ladies who have donated for the postage!  Once payment arrives from the Auctions that went off over the weekend, we will have enough to cover the postage!

I've updated the gauge to show what we currently have, but the auctions will bring us to $4 over target (which will cover packaging and that's the actually donated amount so what I actually received is a bit less than that due to paypal fees)

So hopefully we can get that last lot of money in ASAP and I can get the pads shipped out in the next few days!!!
Posted by Obsi at 1:02 PM No comments:

Pads ready to ship out - we need postage money!

As much as I'd like to be able to pay it and send these off, I can't do it myself.  I've already donated fabric and snaps (as well as time) making them.... So I'm asking... begging!!!  please, help out too, by donating some money to help pay for postage.

I've weighed the pads and I believe it's about 6.5-7 kilos once packed. So according to the Australia Post website, that will cost $130 (Australian) to post express to Sister Hope (It's $124 to go non-express, so I think it's worth paying the extra bit to get it there faster). 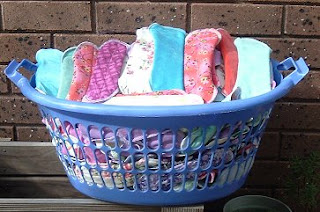 I've put a little fundraising thermometer picture in the side menu to show our progress, and I'll update it as we get more money in.  So far we are at about 10%
So, please look here:
http://au.clothpadshop.com/category.php?SC=35
and contribute in one of 3 ways:
Please help us raise the money needed to get these pads sent off ASAP!!!
Posted by Obsi at 3:05 PM 2 comments:

We had another sewing day again today... 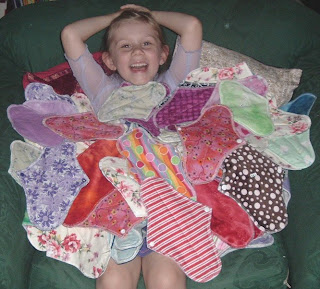 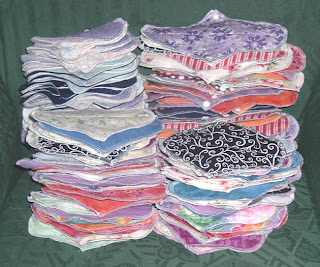 As mentioned in my last blog post, I'm working on getting as many pads sent to Sister Hope as possible, and I thought I'd keep a running total of what we're doing, and who is helping.

As Sister Hope needs 24 pads by May, we're going to try and make as many as we can!


Businesses who have made a contribution:
Twinkle Lily (http://www.twinklelily.com) - Donated several bags worth of fabric
My Name Label (http://www.mynamelabel.com.au) - Donated iron on labels to show absorbency of pads
Red Drop Pads - Donated fabric and pad making
Obsidian Star (me) - Donated a little bit of fabric, and pad making/organising
Posted by Obsi at 2:37 PM 2 comments:

Well, a lot has happened since I last blogged!

Firstly, I've found out about 4 new (to me) organisations that deal with sending cloth pads to women in developing countries!


Also, with the help of some great customers, we've donated a couple of pad sets to the Shanti Uganda Society

And most recently, I've had some beautiful fabrics donated to me from Twinkle Lily.   So far I've sewn up 50 pads and some breast pads that are available in sets on Cloth Pad Shop for postage only. These will be going to the Shanti Uganda Society and Sister Hope.
http://au.clothpadshop.com/category.php?SC=35

(Cloth Pad Sets.  5 pads with a PUL wetbag)
And this week I had a little "Pad Party" (little because in the end only one other person turned up)... and we made 50 pads, with a few more cut out, and we're meeting again next week to make more.  I've also got another lot of donated fabric coming, and I've hopefully inspired 2 other people to hold pad parties, so that's great!!!
Here are a few pics from our pad sewing this week. 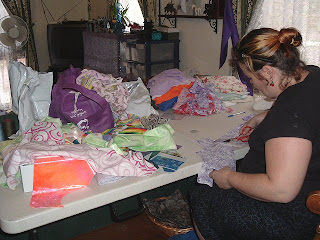 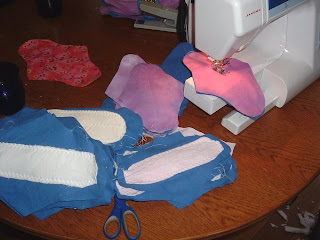 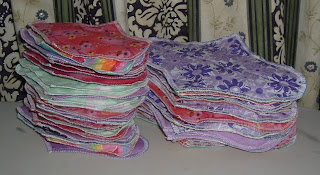 (Our stack of pads) 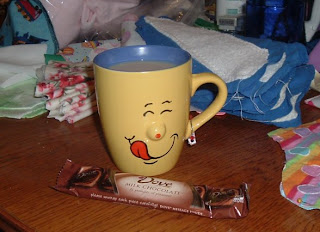 (Every pad-maker needs to stop for a Chocolate and Chai tea break!)

More pics next week when we've sewn more!  And I've done a bit of reorganising and prettying up the website a little, so please go check it out.
Posted by Obsi at 10:42 PM No comments:

http://www.donatepads.org
In many parts of the world, for many different reasons, there are women who are in need of effective menstrual products. It might be too expensive for them to buy them, or they may not even be available at all. This problem affects young women/girls in schools and orphanages (often orphaned as a result of war, or disease), remote village women, women in areas of natural disasters and even women's shelters. There are thousands of women in need of these basic items we consider a necessity.

If you've ever made an emergency trip down to the shops to buy a pack of pads or tampons.... think about what it would be like if there were no shops to buy them from, or no money to afford them.

Since finding out about the problem that exists for women with a lack of suitable menstrual products, I vowed to do something about it. So I created the www.donatepads.org website, and have tried to spread the word about the need for menstrual pads to be donated to women in need.

I've personally sewn up over 650 cloth pads to donate through various organisations. I have also run pad donation drives encouraging women to also sew up pads to donate, and have probably collected another 400 or so from others and sent them to the organisations in large shipments.

These businesses have donated supplies for use in making donated pads. Their generosity is greatly appreciated!